Ok. Next thing to get into the Amiga. the Phase 5 Blizzard PPC Accelerator.

Basicly everyone recomended this guy called Stachu in Poland for this kind of job. So I did. some weeks later I got a package: 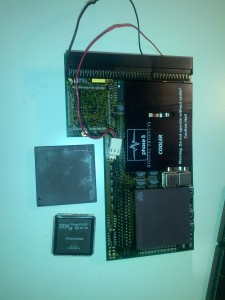 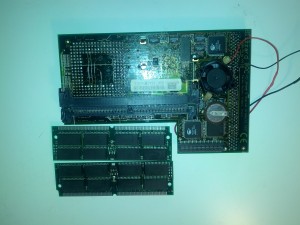 Containing the upgraded card, and the old processors.  Also I bought 2 128MB SIMM modules for it.

One VERY VERY Important thing when using the BPPC Card, it requires a LOT of power.. and I mean *A LOT*

With the BVision module and clocked like I have, 9Amp on the 5V is recomended. and it is also very important that your 5V is stable and does not drop too much. Many ATX PSUs does not hold that good 5V. so do not get the cheap-ass PSUs.  I myself use a AT PSU (got a NOS one) as the old computers needed 5V much more. ATX use 3.3V)

Problem is that the Amiga 1200 motherboard is not designed to deliver this kind of power. So you have to insert more power in the middle like inject it at the floppy powercontact.  Stachu instead did that he soldered a +5V Molex connector on the BVision for this. 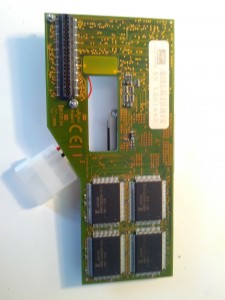 Also he did put a fan on the Permedia chip. (That chip gets HOT, especially when overclocked (it clocks from the 680×0 CPU) so cooling is VERY recomended)

First my Amiga did not start. He asked me to measure the 5V on where the molex was connected.  So I did and got a reading of +4.7V. This was not enough. BUT also.. I slipped.  *ZAPP* 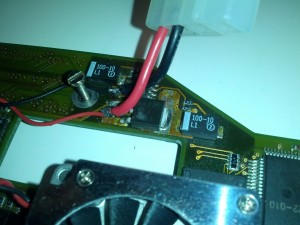 FUUUUu…. it died.  you can see a hole in the Transistor.  BAD news.  well he sent me one.

Meanwhile without the BVision, my machine started up with the old PSU. so lets test ut out and maybe install the OS. 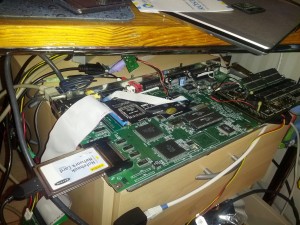 a VERY Ugly setup, I know. but YAY.. it started even without the extra +5V to the floppy. and here I actually did work on the installation of the operatingsystem.

This prooved to be a hard task, and I have written a story how to install WB 3.9 on it: http://wordpress.hertell.nu/?p=18

Well. After this the VERY VERY Slow Swedish post managed to get me a package with a very small content: 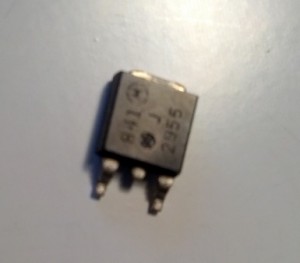 Soldered that one in place on the BVision. and while waiting for it I got hold of a old NOS never used AT Powersupply.   and VOILA. it worked nice.

So Now I knew that I will have a really kickass Amiga. But, this thing gets HOT cooling is required. and HOW do you cool the BPPC in a desktop Amiga 1200?  simply. without modificatoins. you DON’T.

My friend who sold the BPPC to me have actually had it in his A1200 desktop with the 040 and massive heatsink/fan.  so He have glued 3 woodenblocks on the bottom.  and he have left his Amiga here for me to install his new Blizzard 1260. that lift was not required. So I simply changed bottom cases so my Amiga 1200 will be lifted with woodenblocks.  so it gives me a possability of adding a fan to the trapdoor. 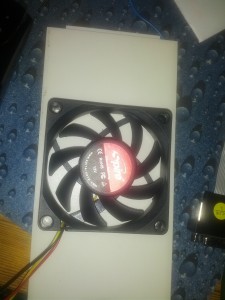 Checking out for size. and it seems to work.  so. Borrowing the Dremel: 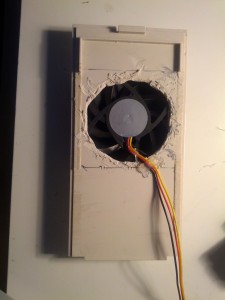 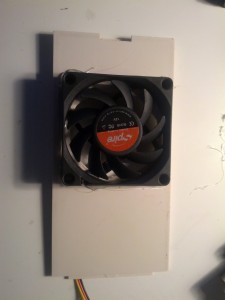 The plastic just MELTS on the dremel it is not that very nice. but I hotglued the fan on it. it will cool both the PPC and 68060 CPU.

So next thing is to test it all, with BVision and all.  and as you can see, it is a very tight fit of the BVision and Indivision. but it does work.

Also. as I will use a Micromys PS/2 adapter for the mouse. (and Lyra for keyboard aswell) the mouseport will not be used. PERFECT for the BVision VGA output. 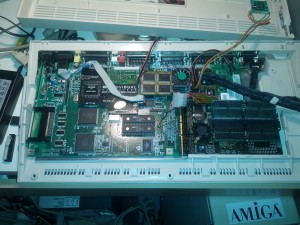 So next step will be to add an IRQ7 button (that is very useful for programming assembler) and as the Micromys takes 1 second to start, I am unable to go to easy start meny before first boot. so I will add a dual-mousebutton-switch for that.  this in Part 3. also adding PS/2 slots for keyboard and mouse.